To Vima, Kapa Research and the Polls

An old Greek political insider, whenever asked to predict the election winner, often refers to the words of Konstantinos Karamanlis:

“You want to know what the dynamics of the political parties are? I’ll tell you when the elections are called and the central dilemma is clear.

You want to know who will win? I’ll tell you the last Friday evening.”

This informal rule and the recently leaked photo with top Syriza officials’ election estimates suggest the following: there is no one who knows the final results beforehand and keeps them from others.

Kapa Research’s election polls presented to the readers of To Vima and tovima.gr, clearly recorded the trends, very close to the actual motion of the electorate. Absolutely no party was hurt or benefited by these polls. 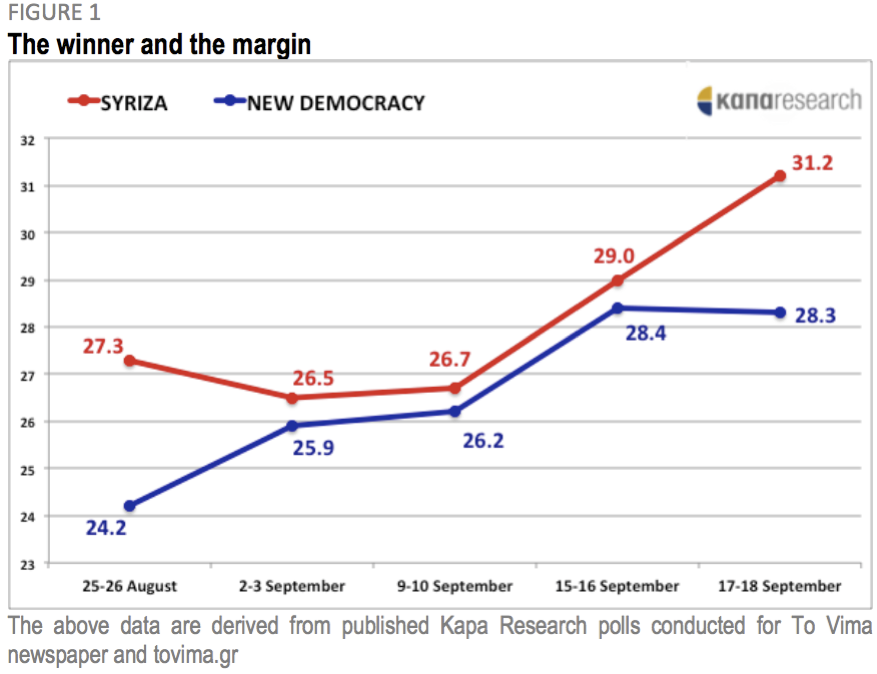 After the announcement of snap elections, voting intention data for the two major parties (Figure 1) showed Syriza starting with a significant advantage (+3.1%). The apparent convergence in the meantime was entirely realistic, echoing the detachment/de-cohesion of Syriza’s electoral base after the noisy split up of the party, the negative symbolism of A. Tsipras’s resigning from the PM’s Mansion, and a positive popularity surprise of V. Meimarakis, New Democracy’s leader, at the beginning of the election period. In the last week, and following the logical accumulation of its electoral base, New Democracy showed signs of fatigue and of a slight drop. At the same time, Syriza withstood pressures, rallied its supporters, increased its distance from New Democracy on last Friday, and despite the net loss in votes (-320,000) boosted its electoral percentage to 35.5%, in part due to a higher-than-expected abstention rate. Unlike other survey organizations, which presented the margin between Syriza and New Democracy getting smaller in the last days, Kapa Research showed a clear trend of a widening margin. 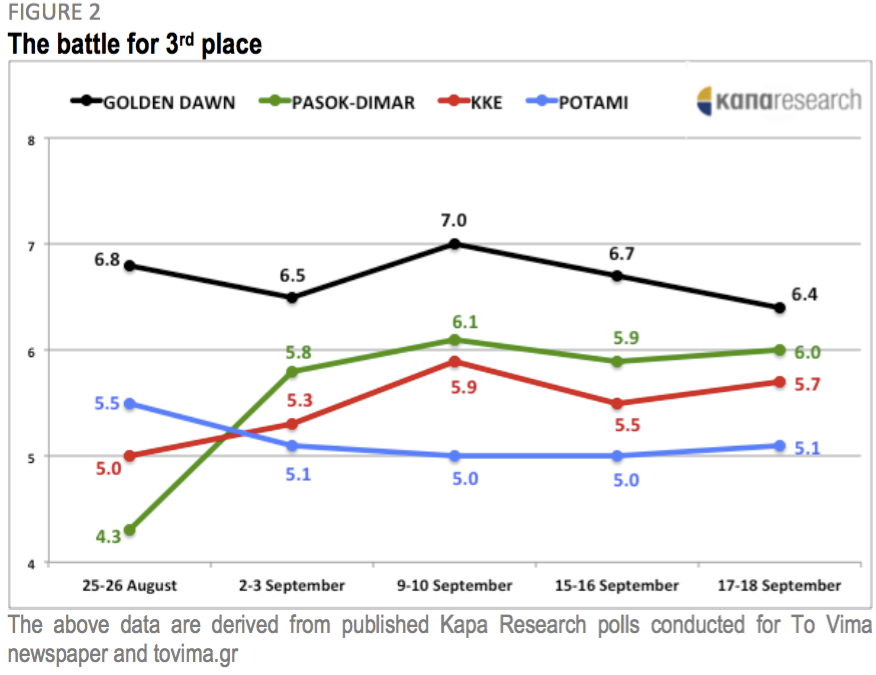 In the middle group of parties (Figure 2) and the battle for third place, polling was quite accurate and clearly revealed the final ranking. Golden Dawn moved between 6.5 and 7% with a clear indication that it remains the third party in terms of electoral power, the Communist Party moved around 5.5% and fifth place, while the weakening trend of Potami and its retreat in sixth place was also recorded. Pasok, which was the surprise in this group, after it aligned with Dimar (Democratic Left) and George Papandreou’s party decided to not run, was rapidly strengthened surpassing the 6% benchmark, but never reaching the goal of the third position, as it was recorded at fourth place until the end. 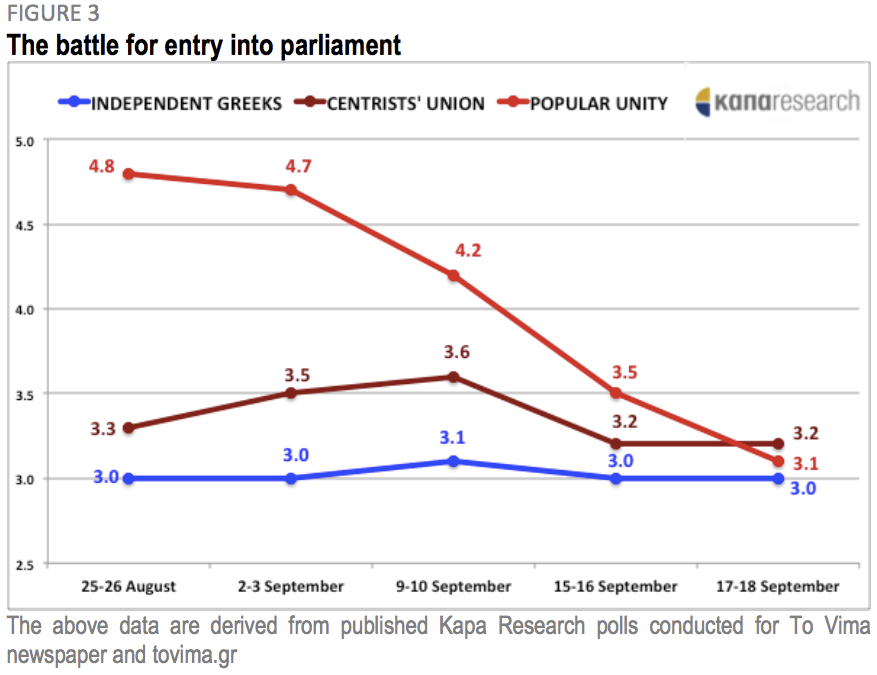 In the group of smaller parties (Figure 3), the presence of the Independent Greeks in the next parliament was evident from the beginning, as was the case for the Centrists’ Union party, while after its early strong dynamic, it was clear attributed that the Popular Unity party was following a downward trend, starting at 4.8% and ending at 3.1% last Friday and 2.9% on election day.

With respect to the overall discussion on opinion polls and their role, studies have shown that, despite the volume of journalistic material that polls occupy, only 8% of the electorate takes them into consideration during the final selection process and less than 1% admits that they play a role in their final voting choice. On the other hand, the argument that opinion polls influence/manipulate the final vote leads, by itself, to contradictions. Its supporters argue that if all the polling companies showed a 7-point Syriza lead on the last Friday before the election, voters would know the “truth” and therefore would behave differently than they did in reality. Following this reasoning, the final difference would again be different from the polls (either higher or small than the 7-point lead) and opinion polls would be blamed as “mistaken” once again.

In practice, voters were neither influenced by polls that showed New Democracy ahead nor by Kapa Research polls showing Syriza leading by 3 percentage points. This argument is senseless, naive, considers electoral behavior to be fixed and absolutely malleable, and treats national elections as a horse race, citizens as gamblers, and polling stations as horse race betting posts.

Voting intention does not constitute prediction of future results. Intention is one thing, prediction another. Besides, 10% of voters decide which party to vote for during the last week, and another 5% on Election Day. Each poll, at the day it is published, is like yesterday’s newspaper. The misinterpretation of voting intention as prediction only illustrates the analytical incapacity of whoever does it, and it happens routinely. Thus, a scientific tool of limited capability turns into a cup of coffee ready to be “read” and the public dialogue into a cafeteria chat.

The fundamental problem rests in the way in which certain parties and the media exploit the excessive number of opinion polls (and polling organizations) to substitute the real political conflict – which requires policy positions, study, hard work, and sincerity – with the cultivation of a “who wins” psychology. (This phenomenon was also present during the critical five days prior to the July referendum. The surprise announcement, the closure of banks, capital controls and the vagueness of the referendum question led to daily reversal of trends. Kapa Research, respecting the readers of To Vima, considered it appropriate not to publish metrics any polls at that time.)

In a country where everything falls apart and everything can be vilified (economy – institutions – media – politicians) it is reasonable to expect attacks on opinion polls. Vilification, however, does not isolate wrong from right and does not fix anything. Instead, the self-awareness to which social research contributes is a factor of progress.